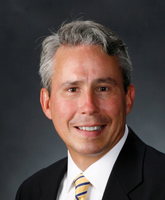 Bradshaw, in his role as Executive Vice President and CIO of NBCUniversal, leads the information technology organization and oversees NBCUniversal’s global IT operations, infrastructure, applications, and strategy.

Prior to joining NBCUniversal, Bradshaw served as Vice President and CIO for Lockheed Martin’s mission systems and training business. He managed IT services that supported business programs and functions, and led the IT integration for major acquisition, resulting in a global business unit of more than 35,000 employees. He also has served as Vice President of Lockheed Martin’s enterprise IT services, leading the team responsible for enterprise application and infrastructure services.